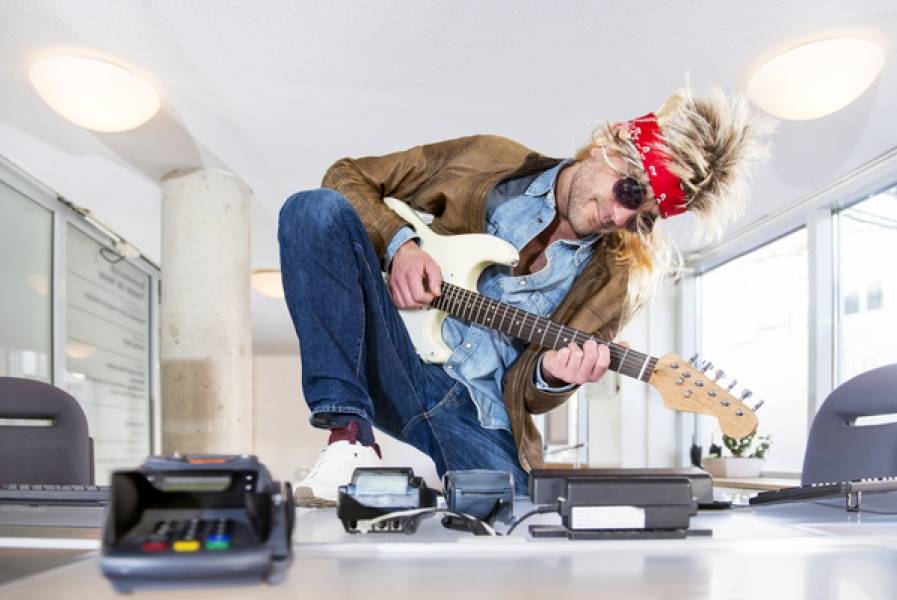 All About Rock Music

The Tunedly Team
October 09, 2019
If you have been following our blog, you would have possibly come across our articles about how to nail pop songwriting, scoring with country music and, most recently, how to write R&B songs. This time around, as the title suggests, we are focusing on Rock Music.
Rock music has been a dominant genre around the world for decades since its invention. In fact, until recently, Rock was the most listened to genre in the United States. With the genre being so widespread and loved, there are lots of songwriters who specialize in rock songs, and for good reasons.
Rock, which includes numerous subgenres such as hard rock, alternative (modern) rock, and punk rock, is still a huge favorite among large swaths of the population. Statistics show most Americans in the 35 – 65+ age group consider rock to be their favorite genre. In addition, millennials in the 25 – 34 age group are also heavy listeners of rock, even if it’s not the most favorite genre for many of them. Both these age groups are among the bulk of income earners and, therefore, spend the most on music among the populace.
By now, you would have connected the dots as to one of the reasons why so many songwriters write rock songs (and why you should too, even if you specialize in another genre). For any songwriter who wants to have a shot at benefiting financially from their creations, writing rock music presents a great opportunity to do just that. But, similarly to other mainstream genres, to make a mark, songwriters need to write songs that stand out. So, how do you write a rocking rock song? We have a few tips for you, but before that, let’s talk a little bit about the origins of rock.

The rise of the electric guitar in the late 1940s is one of the main factors that led to the creation and emergence of rock. Early rock artists fused the already popular sounds of blues, jazz, and country music, mixed it with the loudness of the electric guitar and the aggression of drums and bass to produce the rock sound. Chuck Berry, who emerged in the 1950s is credited as one of the pioneering artists who helped to define rock music.
Described as rebellious and edgier when compared to the more conservative music styles of the day, rock appealed to a younger, more vocal audience, which assisted in its meteoric rise. Soon, the Rolling Stones, Beatles, Elvis Presley, Little Richard, and other rock musicians emerged, helping to expand the genre going into the 60s and 70s.
Over the years, rock music has constantly evolved, with different bands adding new elements that altered the traditional rock sound. In the 70s, for instance, Led Zeppelin introduced a harsher sound that was described as Hard Rock, while the Sex Pistols and Pink Floyd were main proponents of what became known as Punk Rock. David Bowie was among those responsible for Glam Rock.
The 1980s and 1990s saw even more experimentation with the rock sound, resulting in the growth of alternative rock and New Wave music. Some rock bands, such as Linkin Park, have even incorporated rap music into their songs, producing rap-rock in the process.
Today, rock music continues to experience change as newer artists try to both emulate former rock stars and provide their own interpretation at the same time. As such, songwriters have to try and keep up with the demand. There are no shortage of songwriters, but there is always a need for great rock songs.

If you are just trying your hand at rock or have limited experience, you can become good at it by learning and practicing the basics. Below are a few things to keep in mind.
- The song idea
It can be difficult coming up with suitable song ideas, regardless of genre. However, with rock being the straightforward, somewhat brash style that it is, means that you can simply look at what’s going on around you for song ideas. Most rock songs surround common topical themes such as sex, drugs, pain, rebelliousness, trying to cope with life’s struggles, and love situations.
Think about your own life experience, your unmet desires, breakups, people turning their backs on you, things you’re upset about, etc., as inspiration for rock song ideas. Also look around at things your friends, family, and acquaintances are going through, as well as topics in the public domain that receive a lot of attention. If there is a taboo subject that many are falling over trying to explain, avoid or understand, you might just have a potential hit song idea on your hand.
- The hook
One of the alluring components of notable rock songs is their hook. A catchy hook is the part of the song that gets stuck in the head of listeners and helps to attract attention to the overall message. It is one of the smaller sections of the song but it’s one of the most important parts. Without a good hook, the rest of the song will likely fall flat, regardless of the strength of the message.
When writing a rock song, the hook is often derived from the title and is often echoed at least once in the chorus; this can easily be seen in numerous rock hits such as “Wind Of Change” by the Scorpions, “Paint it Black” by the Rolling Stones, and “Nothing Else Matters” by Metallica. How do you know if you have a great hook? Well, if a particular lyric, word (“Zombie” by the Cranberries, for example), or a melody gets stuck in your head, it will likely have the same effect on your audience.
- The lyrics
For some songwriters, coming up with the melody often comes first when writing a song, for others, it’s the lyrics first. Whatever the case for you, the lyrics need to be interesting and thought-provoking. That doesn’t mean it has to be challenging. In fact, the best lyrics are usually those that use simple, every day words which are easily digested. If you’re not sure where to begin, a good starting point for your lyrics is to craft the chorus around the hook/title first and then develop verses that help to explain the theme or idea you’re trying to express.
- The structure
Song structure is also an important consideration when writing a rock song. Like other popular genres, the most common song structure used in rock music is usually verse-chorus-verse-chorus-bridge, but that doesn’t mean you have to stick with this formula. There are successful rock songs that start with the chorus and others that do not have a bridge, so feel free to experiment. Just bear in mind that whatever structure you choose, your song needs to sound cohesive and should be easily understood by listeners.
- The instrumentation
Instrumentation is a big part of rock music, with the electric guitar featuring prominently, as well as bass and drums. But how you use the instruments to create your beat and rhythm sections is also crucial if you want to create a rock song that draws attention. For starters, you need a bit of knowledge of different rock sounds to direct your music composition. Are you going for more classic rock, modern rock, prog rock, or punk rock?
These are just a few of the rock sounds you can draw from, which will determine the time signature you use (4/4 or 6/8, for example), the tempo, and the chords. If deep knowledge of these areas aren’t your strong point, it is okay to listen to popular rock songs to try to frame your composition around ones you like. You can also leave it up to professional musicians to shape the sound around your lyrics and melody. Tunedly is a good starting point if you want to connect with talent who have experience composing music for rock songs.
- The solo
While not a necessity, the instrument solo is a common feature in many hit rock songs. This is usually where the band plays an instrument, often the guitar, to add variation or anticipation at a high point in the song, and commonly involves some energetic “shredding.” As such, instrument solos often occur right after the second chorus. That’s the case with Aerosmith’s “Crazy,” where the instrument solo lasts for about 30 seconds before the start of a bridge. There are also instrument solos that come at the ending to prevent the song from ending abruptly. In Green Day’s “Boulevard Of Broken Dreams,” the solo reappears at the end of the song after being introduced after the second verse. There are no hard and fast rules as to where you include your solo but it should be dramatic and interesting.
Again, if you aren't sure about how to go about creating compelling solos, or any element for creating and publishing your rock songs, for that matter, you can always reach out to the Tunedly team for professional assistance. We provide better opportunities for songwriters who are interested in succeeding at music. Start connecting with the right talents and resources by logging in or signing up now.
Rock on!