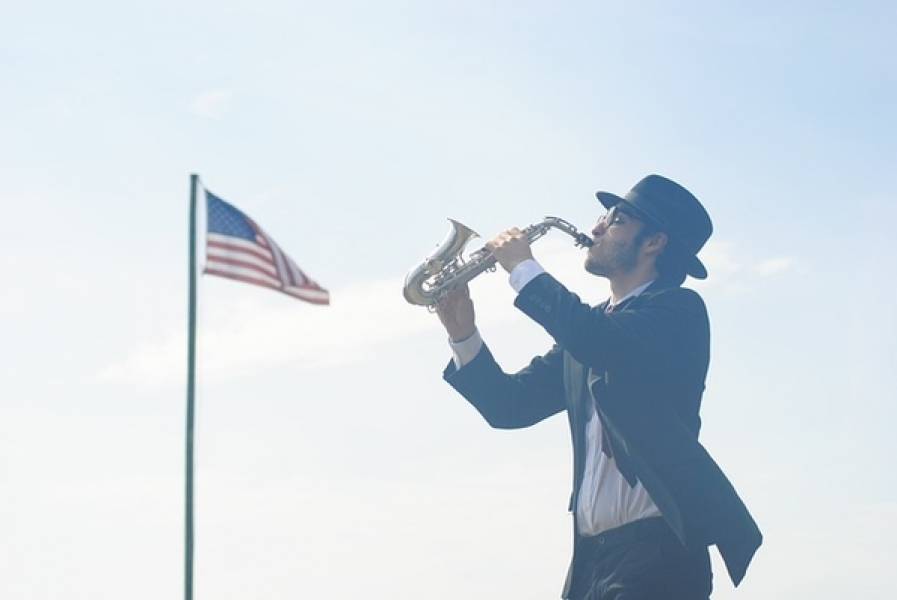 The Tunedly Team
July 25, 2019
American music is considered to be the most influential in the world. If you have often wondered why that is, it’s important to note that it didn’t happen by accident. You see, American music happens to be a huge melting pot, with influences from all parts of the world reflecting the diverse kinds of people who have settled in the United States over several centuries.
This guide will attempt to give a simple overview of American music history so you can get a basic understanding of where it started to what it is now. Let’s go.


The origins of American music

Before Europeans arrived in North America, Native Americans had their own distinctive styles of music. The music of these early settlers was not well documented. Today, pow wow, which is practiced by many Native Americans, is among the few musical practices that endured through the years.
The arrival of Europeans, particularly the British in the 16th Century, was a major turning point for the American music scene. They brought their music with them - including drinking songs, hymns, theater songs, and ballads - which they performed among their countrymen, as well as fused with the music of the Native Americans. People from France and Germany also brought their own music to different parts of America, with German settlers in Pennsylvania performing hymns in their native tongues and French music gaining a foothold in New Orleans.
Not long after, the introduction of slavery also brought the African American musical influence. The Africans brought their “work” songs, which seemingly assisted with the arduous tasks they were burdened with, as well as spiritual songs. These two distinct sounds later influenced modern genres. Spiritualism, for example, preceded Christian music.
Another sound that helped to shape American music was Appalachian folk styles. These included folk music created predominantly by both African Americans and Irish and Scottish people. The songs were often performed in combination (both black and white communities) and reflected way of life living in post-independent America. Appalachian folk music was the starting point for bluegrass and honky-tonk, which evolved into what is now known as Country music.


The fusing of sounds to form American pop music

Now that we have an idea of where most of the sounds shaping modern American music came from, let’s look at how musicians used them over the years to create popular songs. As was clarified in a previous article about how to become good at pop, the term ‘pop’ literally means popular music. One of the defining factors of popular American music is that it tends to borrow from other genres.
Various records show that the idea of popular music, which is music that resonated with a wide cross-section of people, began with minstrel shows in post-colonial America circa 1840s. These shows initially had a racist connotation – black-faced white performers imitating and exaggerating the sounds and styles of African American songs and dances. These shows had large audiences and grew in popularity in the northern parts of the country.
During and after the Civil War period, African Americans also created their own minstrel shows for their black communities. One of the features of these black minstrel shows was a dance segment called a "cakewalk" where the couple with the most outstanding dance moves received a cake for their efforts. Later on, these cakewalk shows would evolve into a style of music called ragtime.
In tandem with ballads and patriotic songs that had been passed down through the descendants of the Europeans, as well as the folk songs created by country folk, the American music scene slowly began to take shape. Before long, a number of artists were making a name for themselves across the US mainland. Tin Pan Alley, formed in the 1880s, became a hub where music creators of the day could get their songs sold as sheet music. "Pocket songsters" also assisted with the dissemination of the music being created, giving more ears to tunes that were created for particular groups and demographics.
Music that had been confined to respective ethnic groups – minstrel shows for white and black, country songs for Southern audiences, etc. – could now be disseminated to the wider populace to be enjoyed by anyone, regardless of race or background.
For example, “My Wild Irish Rose,” an Irish ballad written in 1899, became popular among non-Irish people who would perform the song as well. Jazz and blues music, products of the African American community, also became popular with white Americans who not only listened to such songs but themselves started performing and creating works in these genres.
The growth of the music industry during the latter part of the 19th Century and early 1900s was explosive with the coming of radio stations and TV, as well as the invention of the gramophone. The formation of ASCAP and a number of other music regulatory bodies provided a framework for songwriters to get paid for their works, which encouraged more and more Americans from all walks of life to embrace music as a way to make a living.
But American music was not just simply about people writing songs; it was about being innovative, constantly trying to create a new sound. Songwriters and artists borrowed from and modified sounds and styles from other genres. Pretty soon, artists like Elvis Presley were performing songs that were deemed to have an African American sound while Ray Charles, a black singer with a Blues background, managed to land hits that had ballad (“Georgia On My Mind”) and country music (“You Are My Sunshine”) origins.
In between, new sounds emerged while others phased out. For example, blues birthed a new sound called boogie-woogie, popular among African American communities. Sometime during the 1940s, boogie-woogie evolved into rock and roll, a sound that attracted the youth of the day and brought about the idea of a teen heartthrob (Frank Sinatra and Elvis, for example). Jazz had also taken off and was creating stars, especially among black performers.
During the 1940s – 1960s era, the identity of American music had well and truly been established, especially with the recording industry becoming more sophisticated. The creation of new instruments such as the electric guitar and synthesizer also helped with the definition of each new sound. There was the doo-wop sound, the bebop, soul, prog-rock, glam rock, and psychedelic rock. Rock stars emerged in the form of Jimi Hendrix, Lonnie Mack, Bob Dylan, and many others, albeit with different styles and different messages.
At the same time, country-pop, which appealed mostly to mainly white audiences was being refined and became a mainstay in areas such as Nashville. To this day, Nashville remains a hub for country music and numerous country stars have honed their craft in that city.
As time passed, American music had a growing influence on cultures from near and far. People from these cultures put their own interpretation on the sounds. The Beatles, for instance, came with their own brand of rock music in the 60s, which in turn, helped to influence the next generation of pop.
Other famous artists in the US such as Aretha Franklin and James Brown proved to be pioneers in their own rights as they also influenced pop music with their interpretation of soul/blues and funk music respectively.
Coming into the 1980s, rap/hip-hop was added to the mix of popular music. This type of music was derived from the act of introducing DJ music at predominantly African American parties. Rappers would not only hone their skills spitting lyrics over a beat, they also popularized the idea of sampling other records. Hits by LL Cool J, Tupac Shakur, and Notorious B.I.G. have sampled riffs and phrases from genres as diverse as doo-wop to rock. Today, hip-hop has overtaken rock as the most popular genre among Americans. Also, sampling is practiced not just in hip-hop but in rhythm and blues, country, and pop tunes in general.


Other genres adding to the melting pot of American music

The continuous influx of immigrants from all parts of the world has continued to diversify the sound of American music. Latin music, for example, which made its way from Mexico and Cuba have periodically churned out hits that crossed over from the Latin community into wider society. The most recent examples of this include “Despacito” by Luis Fonsi and “Havana” by Camilo Cabello.
Gospel music, which evolved from the spiritual songs often sung by slaves, has also remained popular, especially among people who follow the Christian religion. Nowadays, however, gospel is more rooted in the soul/R&B sound, a trend made popular by Aretha Franklin, among others.
Not to be left out is classical music, which has its roots in Europe but has become ingrained in the American musical landscape. While classical music from famous composers was largely practiced by descendants of European immigrants who came in the 1700s, the genre would become “Americanized” with the setting up of the First New England School later on. Between the 19th and 20th Centuries, classical music would continue to be impacted, with musicians such as Leonard Bernstein and George Gershwin infusing jazz and spiritualism into their compositions. Later on, classical music became a big part of the Broadway scene as well as the movie industry (scores).
American music has many more parts to it that could cover several blog posts and still only scratch the surface. Hopefully, this post will serve as a simple guide for those of you who might want to see how the music industry in the United States evolved from the early days to its current state.