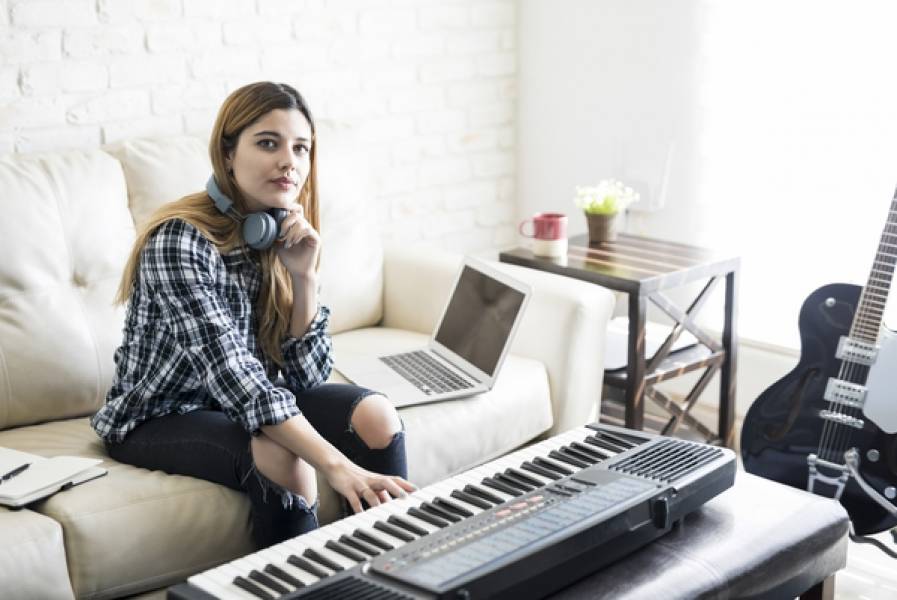 The Tunedly Team
September 11, 2019
The main job of professional songwriters and musicians is to create songs that people can enjoy. But a part of what makes a song enjoyable is its ability to sound believable and realistic.
Making a song sound credible obviously comes down to how the lyrics are constructed. Let’s say you want to write about something as simple as a flower, you need to be as detail-oriented as possible, and write as deeply and intimately as you can, so it’s not easily forgotten. This does not necessarily mean you have to highlight every physical aspect. In fact, a good song about a rose, for example, would not necessarily describe the physical appearance of the rose, but would instead explore its emotional characteristics or connect it to something else using metaphors, similes, and/or personifications. It’s all about using little details that people can relate to on a very human level, even if you are writing seemingly nonsensical lyrics.
Think about a good movie that you can remember line by line, even after several years, compared to one you forgot almost as soon as you put down the remote. What’s the difference? If you think about it, the one that you remember likely had little things happening at just the right time that pulled you into the lives of the main character(s) in an intimate way and allowed you to “feel” what they were going through.
It’s the same with listeners who end up liking a song. The more your audience gets drawn in by your songwriting, the more the storyline will appeal to them. This article will provide a few tips on how you can make your songs more credible and more memorable for your listeners. Let's go!

First off, what are human-connecting details? This refers to those physical, emotional, and mental connections to words that people often make with everything they see. In more technical circles, such details are known as the connotation of a word or phrase.
A word has two parts to it, the denotation and the connotation. The denotation is the actual, literal meaning. For example, according to dictionary.com, a rose can be defined as "any of the wild or cultivated, usually prickly-stemmed, pinnate-leaved, showy-flowered shrubs of the genus Rosa." Sounds all well and good, except that such a description sounds cold and calculated.
The second part of the word, its connotation, is where the life gets injected into the meaning. The connotation is the implied meaning of a word, arising out of cultural, emotional and traditional experiences. In the case of a rose, various feelings can be invoked in people when they hear the word, including love, passion, friendship, and relationships.
The connotations are different for everyone of course; someone, whose first main memory of a rose is at a funeral, will probably grow up connecting roses to mournful or sentimental scenarios. On the other hand, a person who saw their parents always sending each other rose, will automatically connect the flower to love and stability when they become an adult. With that said, the connotation is the part of the definition songwriters need to connect with and use in their songs.

People are naturally drawn to images; it’s one reason why photos tend to get more reactions from people on social media when compared to plain text. But while your song will be aural instead of visual, using your words to paint a vivid image in the minds of listeners will help to get them hooked. This, of course, doesn’t mean being descriptive in every line of the song. As a songwriter, you will need to know when and how to use graphic words that subconsciously invoke images of the message you are trying to bring across.
One way to use imagery well in your songs is to start with a title that produces strong visuals. Such a title can be used as a guide to know where in your song you can emphasize so it paints a clear and relevant image. There are many popular songs with titles that are image-driven from the get-go and sets up the listener for appropriately placed visuals. Sia’s “Fire Meet Gasoline” is one example that instantly paints a picture of explosiveness from just the title alone. The song features supporting lyrics such as “Wanna burn with you tonight” and “Strike the match, strike the match now” which help listeners visualize the type of relationship Sia is describing.
“Brave” by Sara Bareilles also starts off strong visually because everyone knows what it means to be brave (compared to being a coward). In addition, Bareilles uses supporting words and phrases that build on the brave narrative at relevant points in the song. “You can be amazing/ You can turn a phrase into a weapon or a drug” is just one of the many instances she creates this type of imagery in the song.
Getting good at using imagery effectively in your songwriting takes time, especially if you are relatively new to writing anything. However, with practice, it will become easier for you to build lyrics that capture the imagination.


Be true to yourself

One mistake many newbie songwriters make is trying to emulate songs that are making the top 10 on the Billboard charts and racking up the streams on Spotify. It may seem like the best way to get noticed is to “do what the Romans do,” so to speak but you will more likely be doing damage to your own talent if that's your long-term songwriting strategy.
Granted, there is some merit in listening to and emulating other people’s work but it should only be from an inspirational standpoint, rather than trying to be like so-and-so famous songwriter. You want your true voice to come out in your songs at the end of the day, so you can stand out in the crowded marketplace, instead of listeners thinking that your songs make you sound like a Julia Michaels or John Mayer wannabe, for example.
So, how do you create music that represents you but will appeal to listeners who are already obsessed with the sounds of the Adeles and John Legends of the day? For starters, it is important to understand that what makes any songwriter and musician a true success is when they are able to combine what makes them an individual with what the public at large wants to hear.
This can be a daunting task, but who said making music was easy? Many top songwriters, at some point, struggled with this aspect of creating. But what has helped some of them come up with classics was simply writing about their own life experiences and the things in society that affect everyone else. Taylor Swift, with songs such as “Blank Space” and “Style,” among many others, is famous for penning lyrics about love situations she has been in. By doing so, Swift has created a catalog of hits that connect with the emotions many people experience in their own relationships.
While there is no guarantee for success in the music business, staying true to who you are and writing about what you know (and in the way you understand things) will provide you with a better chance of achieving great things. It's all about playing to your strengths while improving on your weaknesses. Happy songwriting.