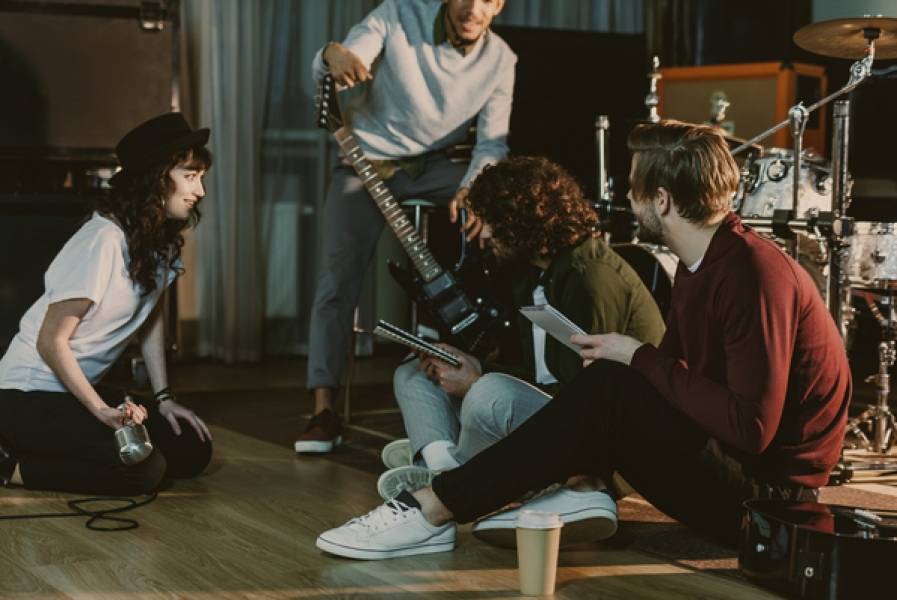 The Tunedly Team
September 18, 2019
It’s a common problem in songwriting: You write a banging first verse and hook, creating compelling lyrics that tell a convincing story. But then comes time to write the second verse and…nothing. Quite often, lyricists find it astonishingly difficult to create a second verse to continue the progression of their message and complete the song.
Not only is this frustrating and demotivating for the once enthusiastic writer, but if the second verse is left to languish, the songwriter might soon put the song into file 13, never to be picked up again. Even worse, aspiring songwriters, who consistently get stuck at verse two, may start questioning their decision to pick up songwriting in the first place.
Thankfully, there are a few ways to get past the curse of being stuck at the second stanza. And, no, simply rewording verse one won't cut it...at least not if you want to create songs that are memorable. In this article, we will talk about a few of the ways in which you can progress onto completing verse two whenever you are unsure how to proceed.
First, a few basics to keep in mind.
To begin with, the average song is usually about three minutes and 30 seconds in length, although more songs have been trending towards the four-minute mark in recent times. In addition, depending on the genre, you might want to get to the hook as quickly as possible – ideally within the first 30 – 45 seconds.
With songs being so short and requiring you to grab the attention of listeners in such a short space of time, the onus is on you as a songwriter to ensure that the content is concise and riveting while expressing something new (at least in perception). While some amount of repetitiveness is useful in songs intended for commercial release nowadays, it’s not wise to simple repeat the lyrics, except for the chorus and other hooks, of course.
Essentially, you want the second verse to be just as interesting while fitting in with the overarching message of the song, even if it is shorter in length than the first verse. Let’s talk about ways in which you can do that.


Contrast the message of the first verse

You may think you have said it all in the first verse but studying the initial points, you might see that the message is one-sided. In Kelly Clarkson’s “Breakaway,” the first verse discusses the dreariness of life while growing up and all the struggles she faced. In the second verse, however, the lyrics talk about all the great things she wants to experience once she breaks away from her current situation. The second verse, therefore, represents a shift from a negative message to one that contains a more promising outlook.


Keep saying how you feel

One of the easier ways to derive your second verse is to keep expounding on the feelings and emotions already expressed in the first. In doing so, the verses might not have much of a difference in terms of the message being conveyed but the range of scenarios being explored, albeit in the same vein, distracts the listener from noticing. This can have the effect of creating a storm of emotions in the mind of the listener as the general mood is extended, only interrupted by the chorus and bridge (if any).
Avril Lavigne’s “I’m With You” does a good job of this with the second verse building further on the lonely atmosphere described in the first. As pointed out, the chorus and bridge work to break up the somber tone of the verses by providing a more positive outlook.

Another way to write your second verse is to simply continue the story you’re telling. Genres that are big on storytelling such as country and folk have many songs that take this approach. However, so as not to be predictable, the second verse doesn’t always have to be just a continuation. Sometimes, you can add a twist near to the end of the second verse, or in an additional verse, or in the bridge. “Whiskey Lullaby” by Brad Paisley and Alison Krauss is one example of a song where the second verse adds to the story told in the first verse but still adds a new dimension by giving the woman’s side of the story.


Tell most of the story in the first verse

By telling most of the story in the first verse, you only need to provide a few supporting details or additional ideas in the second verse. Of course, this doesn’t always mean that the second verse is easier to write, just that it’s shorter than the first verse, so instead of trying to create eight bars to match with the first verse, you only have to write four. This is another common practice in popular music as there are numerous songs where the first verse has twice the number of bars as the second verse.
This technique is often used when the song is at a slow or mid-tempo pace and spends a considerable amount of time building up to the first chorus. “Chandelier” by Sia is one example of a song that has a second verse that is shorter than the first but there is a lot happening before the second gets started.
In addition to trying out the above tips to help in creating your second verse, there are a few things to bear in mind to ensure it fits in with your song structure.
- Be mindful of your rhyme scheme. The type of scheme you use in your second verse should mirror that of the first, so it doesn’t throw off the listener.
- Stay within the confines of the story you’re trying to tell. Again, the listener might get disoriented if the second verse is straying from the topic at hand or is too contrasting.
- You can add chord changes and flourishes to help the second verse stand out from the first.
- If you get stuck, try playing back the first verse and chorus. This can help to jolt your brain into figuring out what else to say.
Writing a song can be fun and challenging at the same time. Once you are able to write the first verse, completing the second only requires some patience and a little perseverance, as well as trying out these tips.