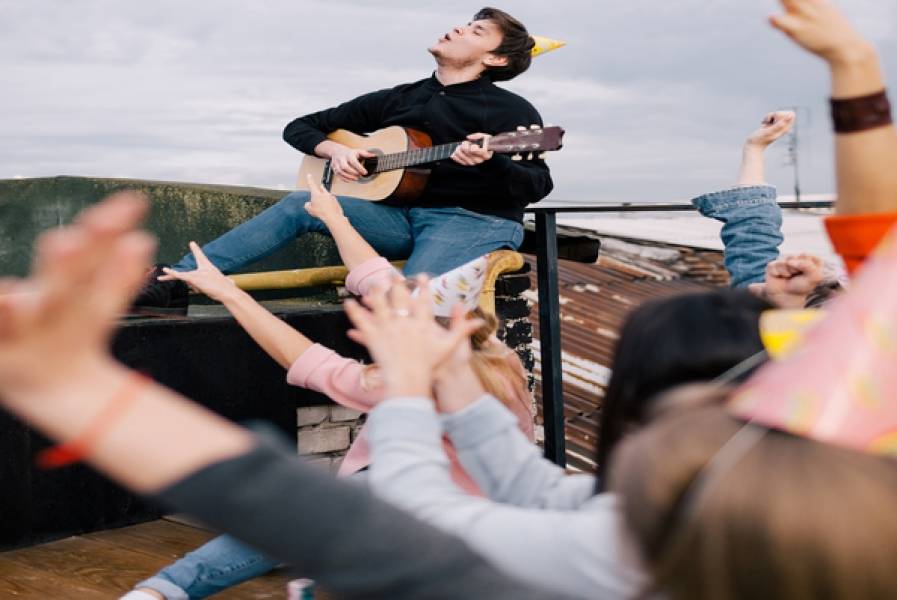 The Tunedly Team
April 03, 2019
Our uninhibited access to music sometimes results in this essential art form being taken for granted. Yet, music is one of the most profound forces that has helped to shape and tell the history of humans across thousands of years.
The various types of music in existence not only represent the defining qualities of the different lifestyles and traditions making up society, but they also continue to impact our evolution. In other words, music influences people and people influence music. But while it is somewhat easy to see the effect cultural preferences and practices had/have on music’s development in some areas (storytelling and religious practices, as two examples), the connection between music and how it impacts human development is sometimes overlooked.

Music is as simple as it is complex, which is why there are so many different definitions for it. In addition, unlike other art forms that can be touched and/or seen (drawings, paintings, acting, dancing, etc.), music has no physical form. For that reason, a simple definition of music is that it is sound organized in such a way as to evoke various types of responses. It often involves the use of instruments or vocals (or both) and contains elements such as pitch, rhythm, harmony, and timbre, all of which determine the overall experience for the listening audience.
Music doesn't just come from thin air; the creators and performers of music are inspired to do so for myriad reasons. Furthermore, the different sounds of music are influenced by factors such as technology, individual creativity, and available resources, among other things.
Because music can be arranged to have a seemingly endless array of qualities - from being soothing and soulful to sounding sorrowful and shrill - it's effects are plentiful. Music can help people get through bad days, set the mood for romance, liven up social gatherings, and much more. Already, it's clear to see how inextricably linked music is to the existence of humans.
Let’s break it down further with these 8 roles of music in human culture:


1. Providing a voice for the masses

Whether it’s to speak out against injustices or to bring an issue to light, music has, over the years, provided an outlet for the masses. This has been manifested in a number of ways, either through one or several artists creating music to represent the views of a segment of people or a group creating lyrics, or borrowing from popular songs, to use in a movement, such as in a protest. During uproarious periods, there have been a number of songs which served as a voice for many people. Examples include "Give Peace A Chance" by Plastic Ono Band, "A Change is Gonna Come" by Sam Cooke, and "Mississippi Goddam" by Nina Simone.

This is probably the most popular use of music. From parties and get-togethers to holiday observations and competitive sports events, music is used as a way to drum up a celebratory mood. Many cultures also use music to celebrate things like the arrival of a newborn baby or the memory of a loved one during a funeral. This use of music for celebrating, in human culture, goes back to ancient times. For example, when armies would have musical celebrations after conquests.
Here's a cool fun fact when it comes on to celebratory music: the song "Happy Birthday" was entered in the Guinness Book of World Records as the most recognizable song in the English language. Also, up until it was placed into the public domain in 2016, Warner/Chappell reportedly earned up to $2 million annually in royalties for use of the song.

Although an art form in itself, dancing is often accompanied by music, which often helps to communicate the meaning of the movements and vice versa. Skillful dancers are usually able to not only move in syncopation with the rhythm but also use their moves to portray the essence of the piece of music being played.

For many people, music is often a way to cope with some type of challenge they might be facing, including relationship drama, tragedies, and even insomnia. People draw on both the message in lyrics, as well as qualities such as melody and loudness of music to help them get through spells of depression, emotional hurt, tedious tasks, and many other day-to-day struggles. While no one is quite sure why music is so effective in helping people cope, research shows that it does help. One study, in particular, found that listening to music appeared to have similar effects on brain functions as taking medication designed to do the same.

In a similar manner to the previous point, people use music as motivation when trying to get something done. People who exercise is one common example; they either use music as a way to pass the time while they work out or they listen to songs that have inspiring lyrics or which give them a feeling of empowerment (or all of the above). Like many of the other roles listed in this article, there are tons of playlists dedicated to music being used for motivational purposes.

At its most basic nature, music is a communication tool. It is a way to share information, ideas, and feelings. With that said, many people find it difficult to communicate with others, especially if they are shy or introverted. Music provides an avenue for these people to communicate, whether by writing down their thoughts in the form of song lyrics or by using songs from other artists to make a point. This is actually how many musicians started out, by putting their thoughts to paper or drawing inspiration from other artists because their song was able to put into words something they struggled to utter or explain. As they say, there's a song for everything.

For many people, relaxing music is the perfect way to unwind after a long day at work or after a study session. Some people also find it hard to sleep because they aren't relaxed, and music is helpful in these cases as well. In fact, one study involving 94 students who had problems sleeping, found that music significantly improved sleep quality among those exposed to music at bedtime compared to those who were not.


8. For education/ sharing of ideas

The power of music is not lost on those trying to educate others or pass on ideas. Politicians, for one, have been using music in their campaigns as a way to convey their ideas to the electorate, even as they provide entertainment. Many educators, who aren’t music teachers, also include music in their lessons, in order to make some difficult subjects more palatable and easier to understand. As for advertising campaigns, one only has to look at many social media campaigns to see how extensively music is being used.
The reach of music will continue to be intertwined into the fabric of world cultures, which is why it will keep on being one of the most important parts of everyday life. As is commonly said, music is life.