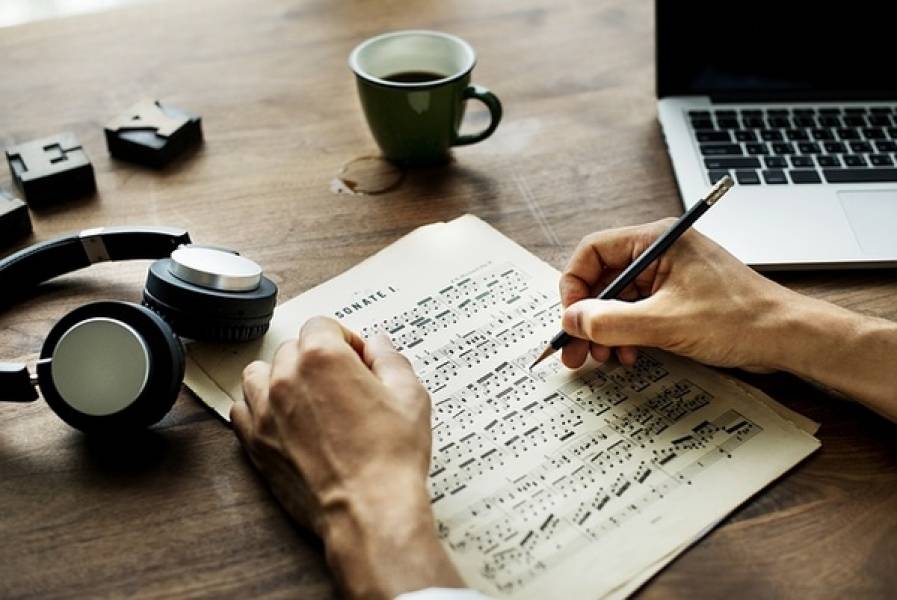 The Tunedly Team
August 01, 2018
Becoming a songwriter can be an excellent career move. For one, it allows you to make use of your creative talent from a musical standpoint and, for two, there is an opportunity to make substantial financial gains from your creations.
Making money from songwriting, however, is not nearly an easy task due to the high level of competition and the listening public’s fixation on just a small segment of the market – the most popular artists.
Still, there are plenty of opportunities within the music industry that can be tapped and which can help you to earn comfortably from writing songs. If you’re just getting started in the business of songwriting and not sure which area to focus your creative energies on, you might want to examine and explore the different songwriting jobs that can be pursued. Or maybe you’ve been practicing one type of songwriting for a while that hasn’t been giving you the results you’re expecting. Either way, here are 8 different ways to earn from songwriting.

This is the type most people think of when they hear you’re a songwriter. As a performing songwriter, you sing/perform your own songs. You can do gigs at local bars and clubs, go on tours, or make appearances at shows you’re billed for.
Getting started is as easy as performing a song you’ve written at a birthday party for your neighbor’s kid or at a friend’s wedding reception. However, it is often difficult to get much exposure for your music when just starting out since you’ll be going up against big-name performing songwriters who are already popular, such as a Taylor Swift or Bruno Mars.
In fact, that’s one reason why many songwriters try the other songwriting routes below to try and get a start before stepping out as performers of their own songs. Ne-Yo, who started out writing songs for other artists, is one example…which brings us to the next way you can earn as a songwriter.

Writing for other artists is a great way to get started in the music business as a songwriter. Not only is it an excellent way to start building an income stream from the songs you write, it can also help lay the foundation for your own career if you plan to start performing in the future. That’s because there is a chance for your name to start getting some spotlight by appearing in the credits of a song performed by a popular artist but written by you.
If you don’t plan to perform in the future, it’s still good PR since other popular artists will want to work with you if you build up a portfolio of credited hit songs. In addition to Ne-Yo, Julia Michaels, Ester Dean, and Max Martin are also examples of songwriters who got started by writing songs for other artists.

This is the same as being a performing or singer-songwriter, except that you’re doing it as part of a band. There is a common notion that two (or more) heads are better than one, and being in a band might work out better for you than going it all alone. For one, it might be easier to come up with song ideas, plus if you don’t play an instrument, having others that do can help you make better songs collectively.
On the other hand, bands can sometimes have members that clash personality-wise and there might be issues when it comes on to splitting up royalties. However, these can be mitigated by everyone taking a professional approach (drafting contracts and lawyering up) and by having frank discussions about monetary shares and band roles, etc. Songwriters who have done well in bands include Bono of U2, Mick Jagger of Rolling Stones, and Paul McCartney of the Beatles.

If you’re a songwriter who is great at coming up with lyrics but not necessarily at blending those words with music, you can still make your mark, in more ways than one. As a lyricist, there are others out there who can help you turn your lyrics into complete songs. Connecting with Tunedly, for example, allows you to collaborate with world-class session musicians, singers, and producers, who can take your lyrics and apply all the other ingredients to leave you with professional-sounding demos and full, radio-ready songs. If you have a knack for writing poetry and lyrics in general, you can keep on doing what you're doing with options like Tunedly around.

If you want to hire out your skills to anyone who might be looking to have a song written, you can also go the freelancing route. This is also a great way to make cold, hard cash from your songwriting skills but there is one drawback. Whereas there is a chance to continue earning for years from other songwriting jobs via royalties, you’ll only get paid once as a for-hire songwriter, so you have to keep doing it in order to get paid.

This is another route some songwriters might take early in their careers, especially if they are not getting anywhere trying to perform their songs on their own. As a staff songwriter, a publisher agrees to publish your songs for you via a contract.
Some publishers have a lot of clout in the market and might be able to help you gain recognition (and money) for your music much quicker. This arrangement, however, does have its downsides. Depending on the type of contract you signed, you might lose the rights to your own music. You also might lose creative freedom and you might also be barred from accessing certain opportunities that could be more lucrative or attractive, at least until your contract is up.

If you’re great at writing catchy lyrics, hooks and melodies, you might want to take a look at writing jingles for ads. Usually, jingles are short, catchy tunes that are only a few seconds long and can fetch you decent financial returns per placement. If you can capture the essence of a major brand in a few catchy lines, you might be onto something.

The big screen consumes a lot of music. Every TV show or cinema blockbuster you can think of has some music accompanying theme music and/or score to carry off the action on screen. Hans Zimmer is one of the most famous proponents of this segment of the music business but there are many others who have made music for the big screen. Danny Elfman, who wrote the opening theme for The Simpsons, is also well known, as is our very own advisor, Harvey Mason Jr., whose skills have enriched movies such as SING and Pitch Perfect 3.
Regardless of where you're at in your songwriting journey, there are numerous avenues to deploy your skills. It won't hurt to shop around to see what's the best fit for your talent and lifestyle. If you found this article helpful, be sure to pass it on by sharing with your friends.