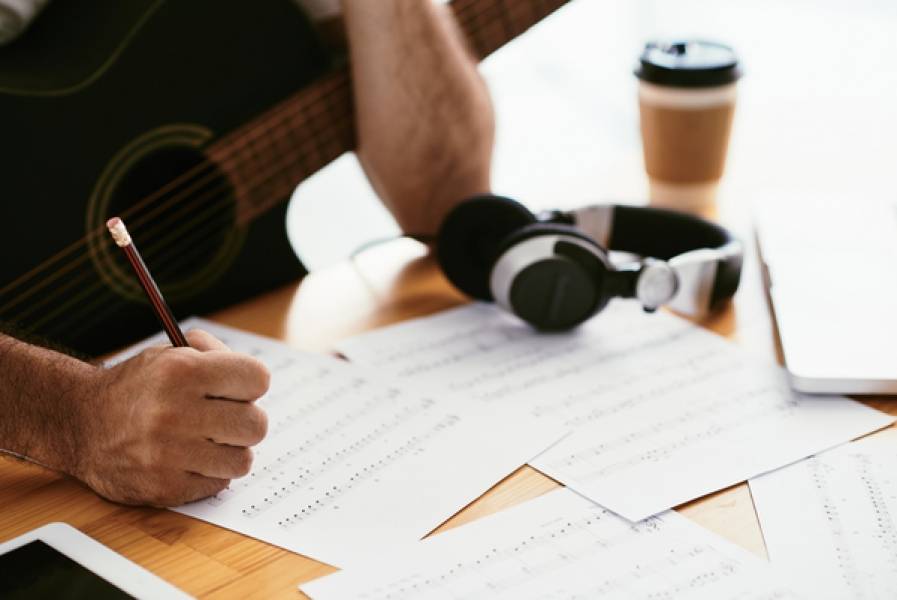 The Tunedly Team
September 23, 2020
What’s your songwriting process like? Do you spend days mulling over a song topic before putting pen to paper? Do you write a verse or two and allow it to grow on you for a few weeks before deciding to move on? Or are you the type of writer who goes into lockdown for a few days at a time to hash out a bunch of songwriting ideas?
Considering that you are competing against numerous songwriters, some of whom commit to writing a set amount of songs per month, you want to work on your productivity as well. One exercise you can try is to write your songs quickly.
A number of popular songwriters have alluded to their abilities to produce songs at blazing speeds. Some of their quickly-written songs have even become hits. Prince, Sia, Mariah Carey...just a few that have been highlighted for this particular talent.
Top R&B songwriter, The Dream, has confessed to producing songs pretty fast, with “Single Ladies (Put A Ring On It)” by Beyoncé being among his quickest at 20 minutes. The Beatles, with main songwriters Paul McCartney and John Lennon, created some of their songs with relative speed (“Yesterday” was said to be conceived in the space of a minute).
More recently, Ariana Grande and her team of songwriters – including songwriter extraordinaire Max Martin – reportedly completed her entire Thank U, Next album in just two weeks.
If you have ever wondered if it’s possible for you to pull off any of those feats, it is. Below are a few tips on how to write songs quickly. We are talking about taking a few hours or even a day to craft a full song, complete with verses, chorus, and bridge (if necessary). Let’s go…

This has to be one of the most important steps in trying to boost productivity in any discipline. Setting a time limit to get a task completed automatically forces you to get more done in that short space of time. When you commit to writing a song in, say, two hours, you will be more driven to get started, as well as to find solutions when you get stuck than if you did not put yourself in a time crunch.


2. Create your own inspiration

Songwriters that sit around waiting to find songwriting inspiration often realize they rarely get much done. This is an unsustainable way to approach a songwriting career unless you only plan to do it for fun.
Instead of waiting for inspiration to write songs, you should practice ways to farm your own inspiration on command. This means looking for song ideas in everything around you, from gripping stories on prime time news to funny memes that are trending on social media. In addition, you can practice walking around with a notebook and pen so you can write down song ideas as they come into your mind. When you set out to write a song, just flip out your notebook and pick a topic from the list.

If you obsess about writing a pretty or well-structured masterpiece, it is unlikely that you will complete a song in the time period you have set for yourself. Simply focus on getting the lyrics, melody, chords, and harmony down as fast as possible, even if they don’t seem to gel together just yet.
Besides, the exercise you are embarking on is to see if you can write a song quickly, not prettily. The more you practice this exercise, the better you will get at crafting a song quickly that is also meaningful. Furthermore, once you are done writing the song, you will have the opportunity to refine it. This brings us to the next tip.

This is a general rule when writing anything, whether you are working on a novel, blog post, or song lyrics. The idea is that stopping to proofread in the middle of your project can be a distraction in and of itself, because you may end up getting stuck on fixing everything that seems to be out of place.
You want to focus on hashing out the entire song first, taking a break from it, and then proofreading it at a later date with fresh eyes. Don’t worry if what you have written is not worthy of being developed further. Remember, this is practice. You will get better at it eventually.

Stick to the basics when trying to write a song in quick time. Don’t try to come up with complex chord progressions or time signatures. Also, stick to conventional song structures and formats that you are already used to. Sure, you run the risk of your song sounding unoriginal but, like the proofreading aspect, you can always modify your song later on.
There is no real right or wrong way to go about writing a song. But if you are a professional songwriter, productivity is important. The last thing you want is to wind up with numerous unfinished lyrics and undeveloped song ideas that lead to nowhere. Learning how to write songs at a quick pace will make you a more productive and valuable songwriter over time.