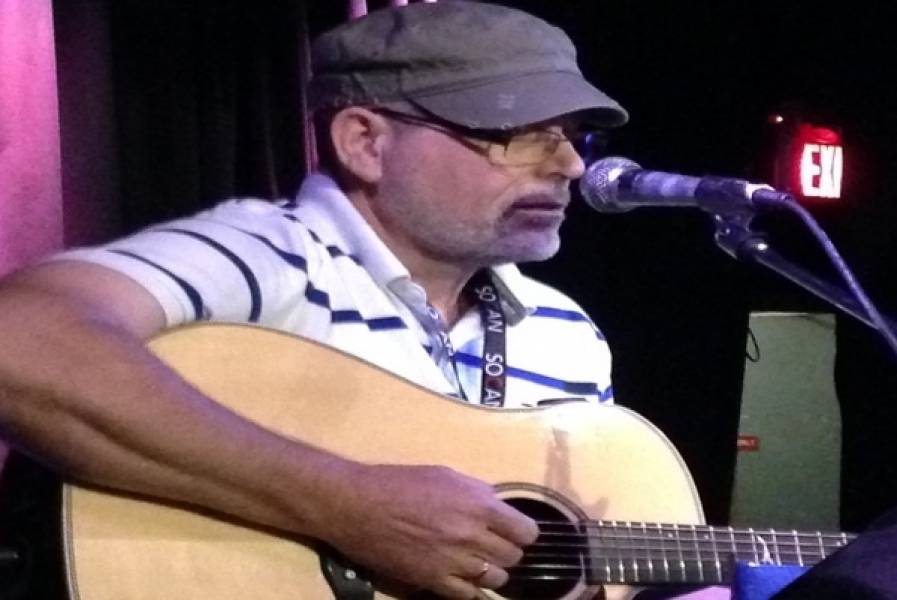 The Tunedly Team
September 25, 2019
For many people, songwriting is a primary means of making a living, while for others it’s a means to an end or just a hobby. For Vince Campbell, a 50-something, retired army vet, it’s the start of a second life.
Vince only seriously took up writing songs less than a year ago, but already, he has plunged headlong into all the possibilities that come with the craft. Not only are lyrics gushing from him like a river in spate, but he is also exploring and learning and, now, even taken on co-writing. You can say he is a songwriter re-born.
After a recent talk with the enthusiastic songwriter and happy Tunedly customer, we were inspired by Vince’s story and decided to share a bit of his life with our readers. This article will take a look at Vince’s unusual songwriting journey and his venture into co-writing.


Who is Vince Campbell?

Vince Campbell is a folk singer, songwriter, and storyteller who was born in Calgary, Alberta in Canada. He has lived in Black Cape, Quebec, Oromocto – New Brunswick, and Springhill in Nova Scotia, where he attended Springhill High School.
Campbell’s love of music began early in his life – starting with owning his first guitar at the age of 12. He also got hooked on the music of Gordon Lightfoot and Burton Cummings during his growing-up years, repeatedly borrowing vinyl albums of both artists from the library until they were worn out. While his adolescent years indicated a career in music, life had other plans for Campbell. In fact, he joined the military and was in the service for decades, effectively ending any chance of becoming the next Neil Young. And while he always had song ideas in his head, the time was never right to put pen to paper…until now.

Once you have the music bug it never truly goes away. This has proven true for Campbell, who, after being diagnosed with PTSD and Major Depressive Disorder as a result of time spent in the military and corrections service, decided to start writing songs in 2018 at the age of 53! At first, it was just a means of therapy. But as the months have rolled by, Vince has taken his craft more and more serious.
The journey has not been anywhere near easy, however. For starters, Vince has 50% hearing loss from his time in the military and wears hearing aids in both ears. That has turned out to be a blessing in disguise as the hearing aids have significantly improved his hearing. “Music hasn't sounded better,” says Vince.
Nowadays, the industrious songwriter is constantly working on something new. He writes songs about people and places of interest in his life, past and present events that stand out in his mind, and stories from his childhood growing up in Eastern Canada. Vince also gets songwriting inspiration from the stories of the hardships faced by his ancestors when they arrived on the East Coast of Canada from Scotland in the late 1700s. In that regard, Vince has written two songs, “Anne Of Campbellton” and “Black Walls, Black Ceilings,” the latter of which has been selected for a radio and TV publishing contract.
When it comes on to his songwriting process, Vince writes in a traditional way. “I write my songs first completely, then add the music, so kind of a surprise at the end of the song; the song tells me the way it should sound.”

Currently, Vince is in the process of writing and recording an all-acoustic album, working with Tunedly for music production purposes, and learning the ropes of co-writing with other songwriters at the same time. Where the latter is concerned, he has quickly embraced the concept. Realizing the power of co-writing (most songs entering the charts nowadays feature multiple songwriters rather than a single writer), Vince has been involved with several workshops where he wrote songs with other creators.
“I attended SongStudio [2019], a week-long songwriting workshop at The Royal Conservatory of Music in Toronto,” noted Vince. “There, I co-wrote a song for the event with Jordan Sweet, a folk singer from Ontario.”

SongStudio is held once every summer; it promotes co-writing between songwriters and is run by Blair Packham and Alistair Bradley. Vince was full of praises for the event and how it helped with improving his songwriting skills.
“You learn how to write songs but mostly learn the power of co-writing,” says Vince. “Basically what happens is, you write your song and then perform it in front of 10 other songwriters and a mentor. Your song is critiqued and you can choose to make the changes you want based on the suggestions. Quite often, obvious things are overlooked, like adding [lyrics] or modifying a work to give better meaning. Or shortening the song by adjusting the verses. During that critiquing there is a mentor present, who provides their opinion on how to improve the song. Members are encouraged to seek out compatible co-writers when writing songs in the future and to perform their song in public venues around Toronto during the week-long workshop.”
When it comes on to compatibility, Vince believes this is very important. To that end, he thinks he has found an ideal co-writing partner in Valdy, another Canadian folk singer and songwriter. "Valdy and I will be co-writing songs together in the near future. I did write one original song about him called “Valdy In A Bowmanville Hotel” of which I am putting the music to,” Vince points out.

Having achieved much in less than a year since he took up his songwriting pen, Vince is already giving back by starting Songwriting With Soldiers Canada. It’s a program modeled off the popular Songwriting With Soldiers program in the U.S. and seeks to assist Canadian military veterans with a retreat to write personal songs for therapy and to record with pro-songwriters and musicians.
“Presently I'm working on funding for an initial retreat. That's my motivator to help my ‘Brothers In Arms’” said Vince about the initiative.
Vince Campbell is certainly not your average songwriter. However, his passion for the craft and willingness to keep learning at an age that many people think is too old for songwriting, leaves the door open for numerous possibilities.