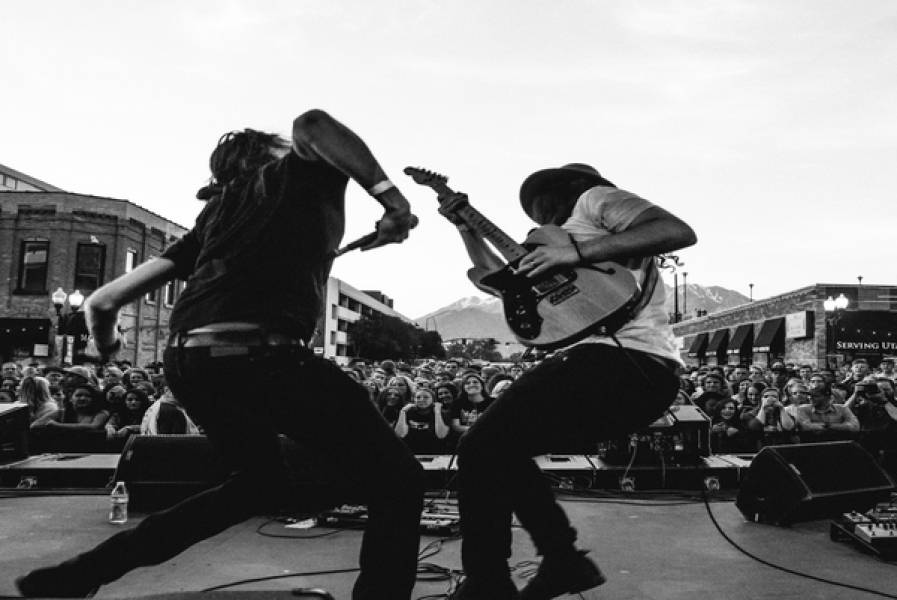 The Coming of Afropop

The Tunedly Team
May 15, 2019
Whether you’re a hobbyist songwriter or someone who has intentions of reaping commercial success in the music industry, keeping abreast of songwriting trends is a good idea. One of the current trends you might want to make note of as a songwriter is the emergence of the Afro-pop genre.

Rising from Western Africa - predominantly Nigeria and Ghana - Afro-pop is an evolved form of Afro-beat, a sound which came to prominence in the 1970s. Today, it is a mixture of dozens of genres, including hip-hop, house, funk, R&B, jazz, dancehall, reggae, and a number of traditional African sounds. As you can imagine, this somewhat new music genre appeals to many ears around the world, due to the amalgamation of different sounds and the growth of internet access across the African continent.
Those are among the reasons why Afro-pop is viewed as the next big thing by many experts in music, some referring to it as one of the hottest genres in U.K. dance music. Evidence of this can already be seen in the number of African-based artists achieving mainstream crossover success. These include the likes of WizKid, who has also collaborated with Drake, and Davido Adeleke, who has several hit songs, including "Fall," in heavy rotation on radio stations in the U.S. and U.K., among other places.

In addition, a number of musicians who are known for their R&B, pop, and even hip-hop hits, have also caught on to the Afro-pop wave. Top selling act, Drake, with the success of his Afro-pop influenced hit “One Dance” is one example, as well as breakout sensation Stefflon Don, whose hit "Hurtin' Me" featuring French Montana, also has elements of Afro-pop.


With all that said, should you jump on the Afro-pop bandwagon?

Probably not for the mere act of doing the so-called “in thing.” You certainly don’t need to follow every trend, if any at all, in order to write good songs. But knowing what’s brewing in the public space will give you a creative edge in case you feel a need to mix things up or add a little spice to your work. Furthermore, if you are a non-performing songwriter who wants to pursue opportunities for your songs to be placed with artists, having a diversity of skills expands your pool of prospects. In other words, you don't have to limit yourself to approaching artists in one genre if you can write songs to match several.
Moreover, learning new songwriting techniques will only make you a better songwriter, so it certainly won’t hurt to know how to write an Afro-pop song. Plus, the techniques can pretty much be applied to whatever genre you’re into.


So, how do you write songs in Afro-pop?

The truth is that it's not much different from writing a pop song. For starters, the main structures used are pretty much the same:
- Intro/Verse/Chorus/Verse/Chorus/Bridge/Chorus
OR
- Intro/Verse/Pre-chorus/Chorus/Verse/Pre-chorus/Chorus/Bridge/Chorus
However, there are a few factors that set African pop music apart from standard pop (if there is such a thing). Below are a few things you’ll need to keep in mind when crafting a song in the Afro-pop genre.
- Choose topics that are appealing and relatable
As mentioned before, Afro-pop, also called Afro-beats (note the pluralization), evolved from Afro-beat, which was popularized by Nigerian superstar Fela Kuti. His brand of music, as well as many others who excelled in Afro-beat, tended to focus on social consciousness topics, such as government corruption (real or perceived), rebelling against the system, and injustice. Whereas Afro-beat tends to have a more serious undertone in terms of topics and content, Afro-pop songs tend to be based on the lighter side of life, such as being happy, having a good time, the beauty and style of people, and love/being in love.
Top African acts who are credited with popularizing the Afro-pop sound in the past decade or so, including Fuse ODG, wanted to create a more positive view of life in Africa with their songs. As such, they purposefully chose topics that would help people take their minds off the troubles of the world, at least temporarily. This is another reason why a number of songs from the genre have managed to garner global appeal.
- It's all in the beat
Listen to any Afro-pop song and you'll realize that almost all of them have that moderately driving, groovy rhythm, called the Clave. The clave is a five-stroke rhythmic pattern that has its roots in African and Cuban music and is used plentifully in latin music, as well as Afro-pop. It's literally one of the reasons why some people refer to it as Afro-BEATS. Many songs in the genre are accompanied by dances or inspire same, as a result.
Many producers of the genre, including Elom Adablah, have noted that many songs start with creating or mixing the beat first, starting with the clave, in addition to your regular keyboard or drum machine. A number of other percussive instruments, samples, and effects can be thrown into the mix. In creating the beat, it should maintain a simple harmony, even while having a complex, rhythmic mix, achieved with the layering of the different instruments.
Since Afro-pop is a fusion of different genres, you can draw on a wide range of instruments to get the sound you’re looking for, from guitars and pianos to trumpets and saxophones. The important thing is that whatever you choose when picking your instruments (or your musicians), they should complement each other, as well as the beat (bassline). Don't worry about it if you don't have the know-how to reproduce authentic Afro-beats, the Tunedly Team has, within its aresnal of trained session musicians, experts who can help with that. But just think about upbeat rhythms around the mid-tempo range when creating other elements of your song, such as the lyrics, melody, and hook.
- Make it repetitive
Repetitiveness is another notable hallmark of Afro-pop songs that have become popular. That’s one reason why many songs in the genre, even though lengthy (many breach the sacred three minutes and thirty-seconds barrier), are still quite catchy and infectious. Segments of the song that are usually repeated include part or all of the intro and the hook, which leads us to the next point...
- Get to the hook...quickly
Many Afro-pop songs tend to have two or more hooks, sometimes starting with the opening verse. Some of the catchiest songs in the genre also stand out due to the fact that they get to the first hook quickly, sometimes almost immediately. This can be done by starting with the chorus or pre-chorus, instead of a verse. Yemi Alade, one of the emerging women of the genre, displays this in her hit song "Johnny."

- Keep it simple with the lyrics
The lyrics of Afro-pop songs tend to be simplistic in nature to aid their catchiness and relatability. Likewise, you will want to keep things simple when putting your words together, so that your song can feel accessible to a wide cross-section of people. In addition, you want to (try to) be aware of slang phrases and catchy language you can use in your lyrics. If you're not up to date with street terms, you can also borrow catchy phrases from other popular songs (be careful, however, there are copyright rules you will need to follow so that you don't get into trouble). Davido's "Fall," for example, samples the line "I don't want to be a player no more" from the song "Don't Wanna Be A Player" by Joe. Other songs in the genre contain lyrics that borrow popular phrases and ideas from other cultures, such as the hip-hop and Caribbean communities, which helps to boost familiarity and relatability.
While most of the Afro-pop songs produced today are from Africa, more and more songwriters in Europe (especially the U.K.) and North America have been catching on. It might be a good idea to check it out as well and, at the very least, expand your songwriting skills.
Hope you enjoyed this piece! Have you subscribed to our newsletter as yet? This article is an example of the kind of content you can expect every Wednesday; in addition to in-depth news about the music industry. We scratch the surface so you don't have to, and deliver the insights right to your inbox. Stay in tune.