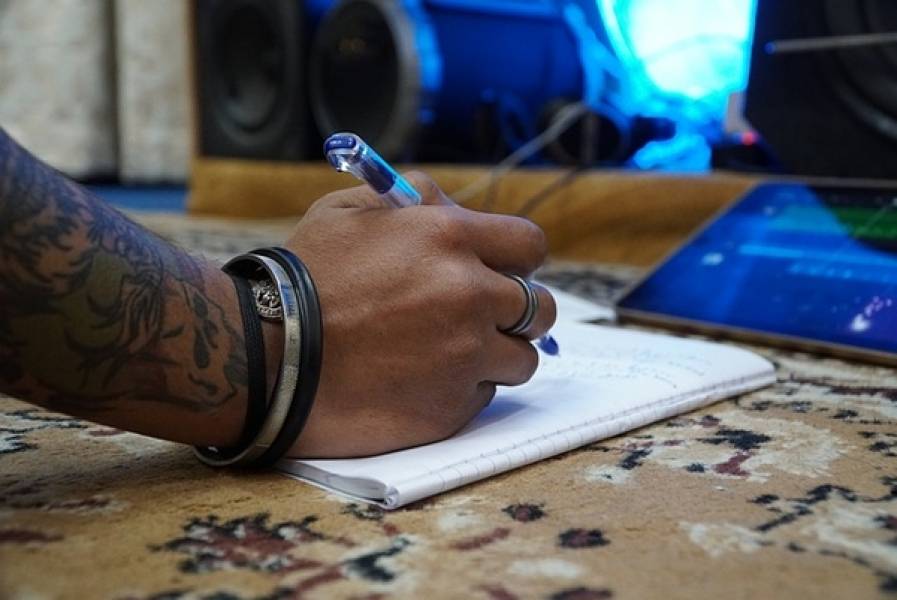 The Tunedly Team
June 24, 2020
Like any skill, songwriting is an activity that can be harnessed and honed. Getting good at it requires hours of practice, patience, and a will to keep pushing even when it doesn’t seem you are getting anywhere. There are also songwriting exercises you can do that train your mind to become more adept at crafting lyrics and melodies on the fly.
But songwriting exercises are not like your typical music training such as learning to play the guitar or piano or building up your vocal cords for singing. Where those are concerned, it is more about working on technical skills. For songwriting, it involves trying different exercises to get your mind ticking and boosting your creative output. Here are five useful songwriting exercises to try out.

When you sit down to write a song, it is likely that you will be thinking hard to come up with the right words to create the perfect lyrics. With judgment-free writing, you simply write down whatever comes to mind and keep going without trying to edit or overthink anything. You can do this within a specified period of time until you have a set amount of pages or until you feel tired. This is an excellent way to train your mind how to get into a flow state. Some of what you write may not make any sense at the end of the day, but it is quite possible that some gems will flow out that you can then pick out to create an actual song later on.


Go on a rhyming spree

There is no getting away from the fact that rhyming is an essential part of songwriting. To get good at it involves building your vocabulary and practicing. One exercise you can do is to go on a rhyming spree by picking a word and then writing down as many words that rhyme with it as possible. For example, if you choose “girl,” you could create the following sequence: “curl,” “Earl,” “twirl,” “hurl,” and so on. You can list as many as your mind can conceive and you don’t have to focus on writing all perfect rhymes. You could, for instance, include “world,” “unfurl,” or even “blur.” At the end of the day, it is all about how those rhymes are delivered when the lines in a song are put together. The more you practice this, the easier it will be for you to create effective rhymes when writing lyrics.


Pick a popular song and rewrite it

The truth is there are hardly any “original” works of art. In songwriting, many music creators utilize concepts and styles found in other popular songs by simply flipping them over or inverting them to create something that sounds different. With that said, you want to get good at this so you can write songs that are fashioned in your own style, even if you got the idea elsewhere. Simply pick a popular song, learn the lyrics, and then try rewriting them in your own voice. You can pretty much do the same thing with the melody and rhythm pattern of the song, whether by slowing down the beat, speeding it up, or finding the opposing chords. Your first attempts may not produce anything meaningful. But as you continue rewriting popular songs, you may just come up with something that sounds rather unique, which you can then put forth as a creation that truly represents you.


Write descriptions for a standout noun or character

What’s the last movie or TV show you watched? How about your last book or newspaper story? There is likely to be a standout noun (such as a place, food, article of clothing, etc.) or a character that was the main subject of the story or which made it interesting. You can work on your songwriting character development skills by practicing writing down descriptions of standout subject pieces from content you have consumed. If it’s a man or woman from a popular film, for example, write down their name and then list a number of words or phrases that represent them in your opinion. Do the same thing if you are describing an interesting object.

Coming up with song titles can be a drag and often take up a lot of time when you are doing a songwriting session. However, you could always have a list of songwriting titles to pick from if you tried this exercise. Just think about song titles based on thoughts that come to mind and write them down, even if they sound long and convoluted. This is similar to the first exercise described above, except you are focusing on writing as many song titles as possible in a specified period of time. Later on, you can always tweak your titles when you are ready to convert them into actual songs.
Getting good at songwriting does not necessarily mean having to take a bunch of courses or buying every book on the subject (although there is nothing wrong with learning from those sources). The important thing is to constantly be learning and practicing so you can become a skilled songwriter who knows how to create catchy and impactful songs.