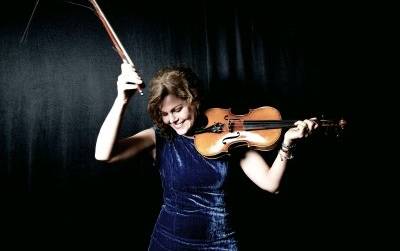 Kristel studied a BMUS and MMUS degree WITS University. For her academic performance at WITS was awarded a Scholarship for music as well as various prizes, including a prize for the best string player. After completing her degree, she continued performing with various classical ensembles, jazz groups, rock bands, folk groups and musical theatre productions, gaining experience and fluency in various genres. Kristel has collaborated on a number of recordings: including a 2008 release titled ‘Burning Bridges’ which features well-known light classics and movie/ popular themes, an original music project under the band name Cherry Pill, an instrumental album of Christmas favourites and the Gypsy-tinged acoustic collection titled "Si Tu Savais"; and two Instrumental Christmas Albums. The SAMA (South Africa Music Awards) nominated "Vignettes for Violin"; was released in 2019 and marks Kristel's 10th album release. As a composer/singer-songwriter, Kristel is part of an original music duo called Cherry Pill that have toured various countries. Two of their songs have received AfriMusic Song Competition nominations in 2019 and 2020 respectively. Upcoming plans include the release of new original music singles and instrumental recordings.

Received both a SAMA and AfriMusic Song competition nomination in 2019 and 2020.