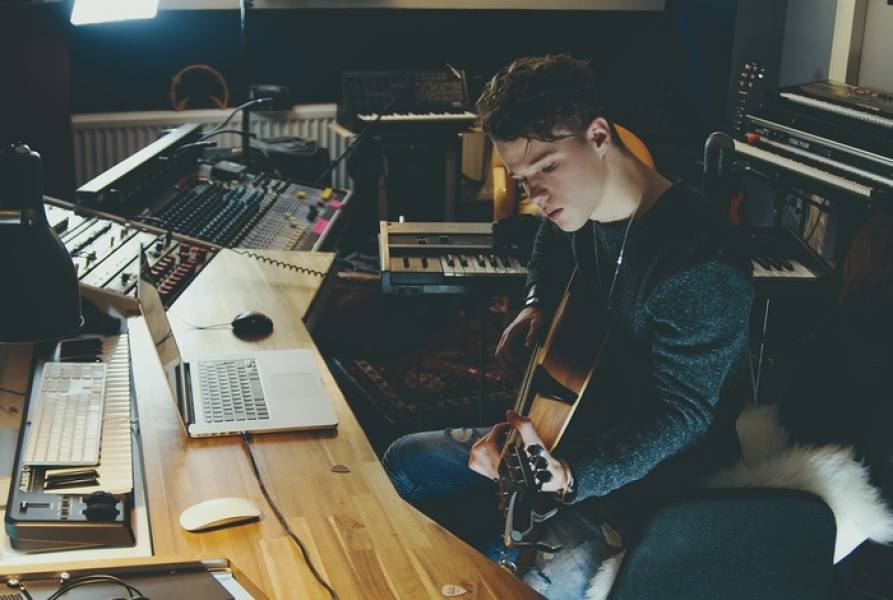 How To Be A Better Songwriter

The Tunedly Team
October 23, 2017
Whether you’re just starting out or at it for some time, there will always be room for becoming a better songwriter.
You probably know where you're currently at in your songwriting journey and might already have an idea as to what your weaknesses and strengths are. Getting better, therefore, may just be a matter of exposing yourself to the right information and practices, and applying them to your daily life.
With that said, here are 10 tips to help you become a better songwriter.

This is particularly for you if you're a songwriting newbie. Once you get the hang of songwriting, it’s not enough to sit down on your talents, only waiting for inspiration to strike again (besides, inspiration can strike when you're not prepared for it and it can also not come at all).
Make songwriting a daily habit, even on days when you don't feel like doing it. The more songs you write, the better you will become. Moreover, the more songs you have under your belt, the more ammunition you will have to go after a professional songwriting career - if that’s what you have in mind - and start the journey of possibly becoming a songwriting great.

There is a popular saying about two heads being better than one and it’s being proven more and more in the songwriting business. Today, the majority of songs that wind up on the charts often feature two, three, four…up to more than ten songwriters. Beyoncé's “Hold Up,” for instance has all of 15 songwriters being credited.
Co-writing not only allows for the sharing of ideas, it also exposes you to the different ways other songwriters create. You could easily learn something new that you could incorporate in your own craft. Likewise, the other writer(s) could also learn from you, plus working together might result in a song being completed quicker and having more appeal to a wider audience of listeners, because it is written from more than one perspective.

The power of personal motivation may often be overlooked, but some of the most successful people in the world, including songwriters, tout the benefits of positive reinforcement. Whether you use personal motivating mantras or just give yourself daily compliments, you will become a better songwriter if you keep promoting a positive, personal mindset.
This is not the same thing as going around boasting to everyone that you are the greatest thing since sliced bread or "sipping on your own cool-aid," so to speak. It’s all about elevating and nurturing your creativity on a daily basis, which could influence your mental state to perform at your best and boost your productivity.

Who says you have to re-invent the wheel to write good songs? Bob Dylan, more or less, once said in an interview that all song ideas have been exhausted already. Whether that’s true or not, you will find that anything you want to write about has been done a thousand times or more before.
Instead of poring over trying to come up with an original song idea, it would serve you better to look at what is already out there and re-tell those stories from your personal perspective. Besides, all great artists steal from other great artists before them. The trick is to place your personal brand of songwriting on it, so it's all you.

Try not to pigeon-hole yourself into focusing on a single theme or idea for a song when you sit down to write. The creative process can take you down many different paths and you never know which one could be the winner you’re looking for. It’s best to record all your thoughts on a particular songwriting topic and then set about assembling the parts that work best together rather than just focusing on developing one idea at all costs.

You will paint yourself into a corner, so to speak, if you try to write the perfect song. It simply doesn’t exist…except in the mind of the listener. Obsessing over the process and constantly re-writing the lyrics can have you working on one song for much longer than needed. Even worse, you may never feel satisfied with the outcome, which could have an even more profoundly negative effect on your songwriting career.
Remember, although you might be writing a song based on your personal experiences, your songs are for the people who will hear it, not you. Therefore, it will always be left up to each listener to interpret the song for themselves.

No matter how great you think you already are, it’s a good idea to get other people’s perspectives on what they think about a particular piece of work. It doesn't have to be from professionals (who might charge a fee to begin with). Play your songs for family and friends and ask them to be brutally honest.
If you have a fan base or you're part of a forum, you can get their feedback as well, not necessarily on songs that you are about to release but on what topics/genres/themes etc. they would like to hear from you next. When you get reviews and testimonials about your work from others, it’s easier to have an idea of not just what you might have been doing wrong but also what to write next and how to write it.

As the popular saying goes, variety is the spice of life…and music. If you check your own personal playlist, you are likely to find several different themes, beats, and genres, among your favorite songs. With your own songwriting, aim to switch up the topics that you write about, as well as the pace/tempo, and even the genres.
If you follow the works of some of the top songwriters of the past and present, you will find that they try a lot of different things with their music. Bruno Mars, for example, has ballads that tug at the heart, up-tempo and funky songs that are light-hearted, and soulful R&B grooves. He even dabbles in a little hip-hop. Taylor Swift has also mixed it up over the years, with her music evolving from country to pop and R&B. Besides, mixing up your songwriting styles will naturally expand your talents and skills.

This goes for a number of things, from not getting the expected results from your songs to not meeting your songwriting goals. For example, if a song doesn’t have the impact you expected, don’t start overanalyzing and blaming it on someone/something external. Instead, go back to the drawing board, get feedback on what worked/what didn’t, what was liked/disliked about it and then use the new knowledge to enrich your new songs.
If it's a case of not meeting your songwriting goals (for example, you set out to create 30 songs per month but only end up completing 5), don’t blame it on the kids, your 9-5 job, or something else. Instead, look for ways in which you can make more time. Get up an hour earlier to write if you can, cut down on watching TV if you do, spend less time on social media. You’d be surprised how the time spent on these things add up. Whatever it is that is not working in your favor in achieving your songwriting success, it will serve you better to find workable solutions rather than making excuses.

Creative processes require a lot of brainpower. Working on anything for hours on end can lead to not only a worn-out mental state, but it could also water down any work you manage to get accomplished. The general rule is to take a 20-minute break every two hours. However, you don’t have to stick with that, once the thoughts are not flowing, it’s best to take a break, distract your mind with something else, and then come back fresh to pick up where you left off.
Continuing to improve your songwriting skills is what will take you from just being good to eventually becoming great. Apply these and any other tips you feel can help you become a better songwriter, and feel free to share them with your friends.


IN ADDITION TO SONGWRITING TIPS, WE CAN ALSO HELP YOU MAKE GREAT MUSIC AND GET PUBLISHED. VIEW OUR MAIN FEATURES.