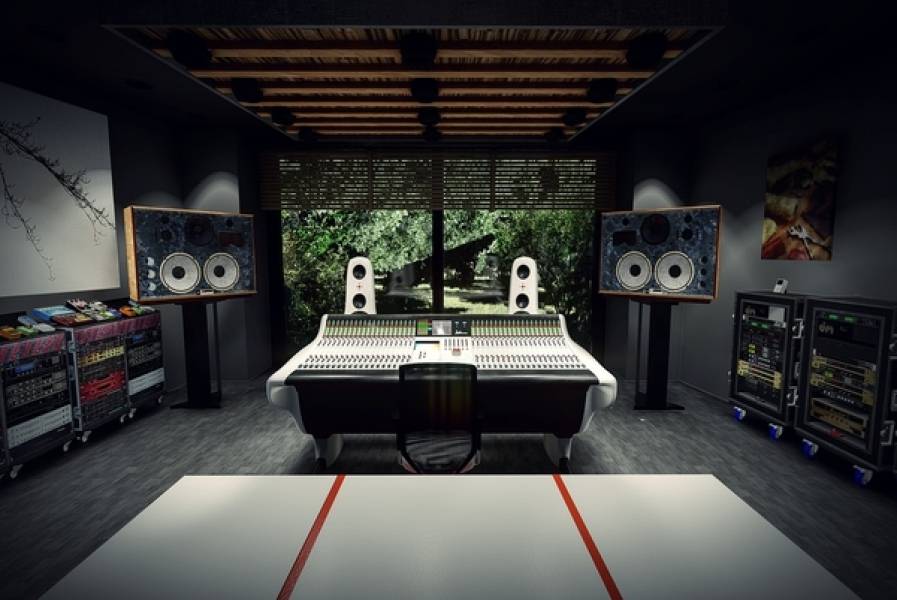 Sunset Sound Recorders
Crazy about Walt Disney movies? Sunset Sound Recorders' strong legacy began with the Mickey Mouse empire, with many of the songs heard in Disney movies of the 1960s and 1970s being accomplishments of this studio. Located on Hollywood’s famous Sunset Boulevard, it was set up in 1962 as a sprawling complex, comprising old commercial buildings and residences. Sunset Sound Recorders may have initially become famous for its work with Disney but it soon had a hand in numerous hit songs that were recorded by many of the whos-who in music fame over the years. In fact, the music recording studio has been responsible for well over 200 Gold-certified records. It also has the distinct record of being the last venue where all the members of the Beatles played together; this was for Ringo Star's 1972 album. Other iconic artists who recorded at Sunset Sound Recorders include:
- The Beach Boys
- The Doors
- Led Zeppelin
...and many more
Capitol Studios
Another music recording studio of historic proportions, Capitol Studios is also responsible for some of the biggest hits spanning several decades. Its phenomenal productions include Frank Sinatra’s timeless recordings. Sinatra was actually the first act of note to record at Capitol and helped to immortalize the studio's reputation, being the joint where he composed many of his hits throughout the 1950s and 1960s. Built in 1956, it was originally aligned solely with artists under the Capitol Records label before opening its doors to the wider public. Capital was known for its state-of-the-art music production techniques and has welcomed some of the biggest recording artists over the years, to include Outkast, Daft Punk and Oasis.

FAME Studios
Florence Alabama Music Enterprises (FAME) was another of the early recording studios that helped to define the early sounds of modern music. Launched in the 1950s in the Muscle Shoals area, it assisted in catapulting a number of pop, soul, and rock musicians to stardom. Etta James, Joe Tex, and Aretha Franklin are among the earliest hitmakers to record at FAME. Franklin has even credited FAME founder Rick Hall for being instrumental in the success she enjoyed during the 1960s. Most recently, Tim McGraw, Demi Lovato, and The Dixie Chicks are among notable acts who have utilized the renowned FAME Studio facilities.
Muscle Shoals Sound Studio
Muscle Shoals Sound Studio has an all-new look nowadays, which is worlds away from its original old-garage look. However, its reputation as a legendary Song Recording Studio has been cemented in history. For starters, the studio is unique in that it was built by the Muscle Shoals Sound Rhythm Section, a group of four session musicians for hire, who worked at the nearby FAME Studios at the time. Built in 1969, it became somewhat of an oasis for musicians looking for recording studios nearby that could rival studios in Los Angeles and other big cities. As such, it became one of the go-to music studios of choice for various artists, including Bob Seger, George Michael, who recorded his hit "Careless Whisper" there, Bob Dylan, whose "Gotta Serve Somebody" was also created at Muscle Shoals.

Motown Studios
Founded by the legendary Berry Gordy, Motown is perhaps the most famous studio in the entire U.S. Appropriately, the iconic music studio's first home is also called ‘Hitsville USA’ due to its track record. Some of the studio's greatest contributions include Stevie Wonder’s 1962 debut "The Jazz Soul Of Little Stevie" and Marvin Gaye’s "What’s Going On." During its run from 1959 to 1972, the sound of Motown churned out numerous superstars. It is little wonder why its legacy remains an inspiration to many current artists. Now defunct, the original Motown studio has been turned into a museum, which attracts plenty of visitors yearly.


WHEN YOU CHOOSE TUNEDLY FOR YOUR SONG RECORDINGS, YOU CAN COLLABORATE WITH WORLD-CLASS MUSICIANS AND MORE. SIGN UP NOW

Sun Studio
Sun Studio was originally called Memphis Recording Service. Set up in the 1950s (which also puts it among the oldest studios in the U.S.), it has the distinct reputation of being the birthplace of Rock 'N' Roll. Iconic artists such as Elvis Presley, Jerry Lee Lewis, B.B. King, and Johnny Cash all recorded here, putting Memphis on the map as a hit music mecca in the process. The studio became well-known for its rich, diverse sound and remains today as a monument of sorts, offering tours to people interested in the origins and high points of rock and roll music.
RCA Studio B
While most of the studios on this list are famous for Rock and Roll, Pop, Soul, and R&B recordings, this studio is best-known for its contribution to Country music. In fact, the 1957-founded studio is one of the reasons why Nashville is considered to be a hotbed for country music. Still, it has played host to various music recording experiments and a diverse range of artists, from Elvis Presley and Roy Orbison to Dolly Parton and Connie Smith, producing tons of hit songs in the process.

Electric Lady Studios
World famous albums like Patti Smith’s Horses and The Clash’s Combat Rock are just two examples of great pieces of music recorded in this studio. Originally built by Jimi Hendrix in Manhattan, Electric Lady was opened in 1970. Unfortunately, Hendrix was only able to spend 10 weeks in the studio before his tragic death. Since then, the studio became a melting pot of sounds, with acts such as AC/DC, D'Angelo, and The Roots making some of their best songs there. More recent acts who have hit the mic at Electric Lady Studios include ASAP Rocky, Coldplay, Lorde, and Lana Del Rey.
Platinum Sound Recording Studio
Platinum Sound Recording Studios is certainly not as famous as any of the other studios on this list but it has managed to make a mark since its inception. Launched in 2000, it was founded by acclaimed rapper Wyclef Jean, in association with Jerry "Wonda" Duplessis, who is also a Grammy award-winning, platinum-selling music producer of note. Since opening its doors, Platinum has welcomed the likes of Lady Gaga, Justin Bieber, and Chris Brown, among others.
As some of the most prestigious music recording studios in the United States (and the world), it's a dream for many musicians to record in these facilities (at least the ones that are still functional). After all, who wouldn't want to stand in the same spot that was occupied by legends such as Elvis Presley, Frank Sinatra, and others? However, physical distance and cost means most music creators can only dream. The good thing is you don't have to search too hard for song recording studios in order to get productions that are similar in quality to what's available in the studios mentioned above.


WHEN YOU CHOOSE TUNEDLY FOR YOUR SONG RECORDINGS, YOU CAN COLLABORATE WITH WORLD-CLASS MUSICIANS AND MORE. SIGN UP NOW