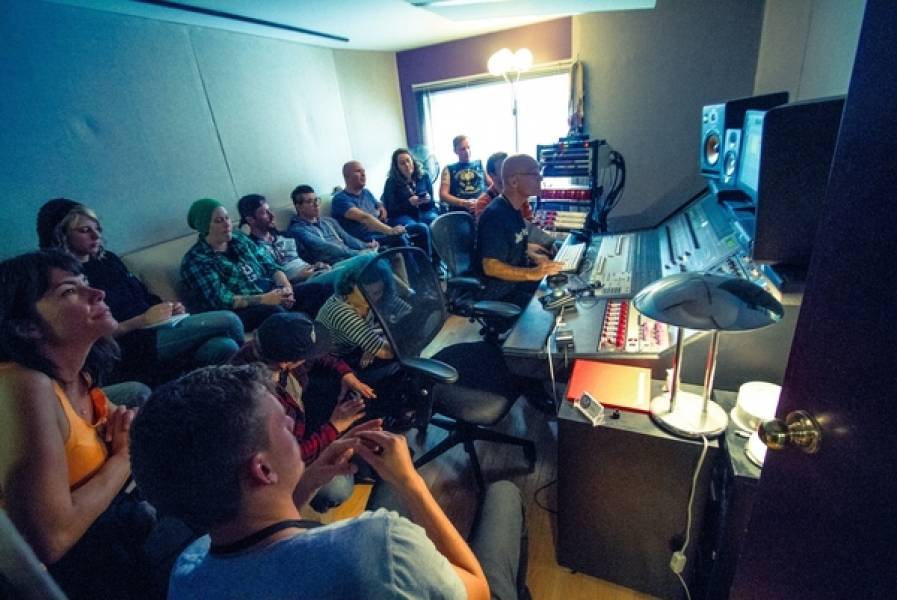 What Goes Into Producing a Demo

“Hear that?” UK producer Chris Birkett’s razor-sharp ears detect a faint buzz on the drum kit. We all scuttle into the recording studio to lay material over a vibrating snare drum and lock the cymbals to ensure a clean recording. “The first thing we have to do is get a feel for the room,” he says.
It’s a crisp October Saturday afternoon and I am crammed into Birkett’s hot Sherbourne St. studio with an international crowd of musicians and producers for his Toronto Indie Music Week workshop, “How to Produce a Successful Demo.” We are here to learn expert recording advice from a pro.
And that he is. Since producing Sinead O’Connor’s Grammy-award winning “Nothing Compares 2 U,” he now lives and works in his studio on Toronto Island at Gibraltar Point. His intuitive talent and generous, open personality wins him fans worldwide, including musicians, award-winning artist Buffy Sainte-Marie, O’Connor and various artists like The Pogues, Talking Heads and Alison Moyet, to name a few.
After a round of introductions, Birkett selects a young, male Australian pop duo to record and begins teaching: “Having the best software is nice but not the key. Use what you are proficient in,” he says, smiling. “And remember we aren’t mixing and mastering now, rather getting a solid recording that can be tweaked later on.” He queues up the first track and the drummer plays a steady thump-thump-thump.
“The most important thing, after a soundproof studio and a digital recording system, is great mics,” Birkett explains. “I like the AKG414B compressor microphone for vocals. Its dynamic range response can handle people like Sinead [O’Connor] who have zero mic control.” He recollects Sinead’s habit of whispering lyrics away from the mic and then screaming directly into it - a nightmare even for seasoned producers.
“The key to a great mic, though, is finding the sweet spot in the room.” Birkett plugs his non-dominant ear (usually the side of the non-dominant hand) and skulks around the room while the drummer plays the beat. “Found it! Here the sound has a nice pop to it.” He angles a ribbon microphone in front of the kick drum and places a dynamic SM57 inside the head to record the attack. For guitars, Birkett suggests mic-ing up by the guitar neck “if you want string squeak.” Students scribble in their notebooks.
Back on the other side of the glass, Birkett runs through the production board and offers tips: Never use compression or EQ while recording. Use a cartoid polar pattern. Always use limiters and maximizers to avoid peaking. Filter the low end on digital recordings to prevent unnecessary bass. Most importantly, set a good level and fix after. “I once fiddled with the levels while a pianist was playing,” he says. “When I said, ‘Okay, we’re ready,’ the musician got up and left, saying, ‘that’s the take.’ I spent the next twelve hours readjusting all the levels!”
Birkett gives the singer a thumbs-up through the glass and lists off more expertise: “Singers must over-enunciate. Always double the track with 100-millisecond delay, it improves hearing the consonants. Stereo delays are good on rhythm guitars.”
Dizzy from information-overload, I ask Birkett to name the three key things for recording a good demo. “A good microphone, an analog-to-digital convertor, like the Scarlett, and a pre-amp, such as the Avalon or API.”
“That’s it?” I ask.
“Well, and a good song,” Birkett laughs. “But then you’d have to come to my arranging workshop.”
Written By Talia Wooldridge, guest blogger - sponsored content from the Songwriters Association of Canada (songwriters.ca)
(Article originally published in 2016)